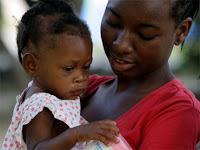 This nugget slipped through my fingers earlier this week. As far as I know, no one has picked up on the significance I think it has.

Haiti judge quizzes US missionaries over child case was published February 3, 2010 by the BBC. The article includes an interview with Hal Nungester, director of HIS Home for Children which underwent a babylift I wrote about earlier. (You need to see the video from the link above. The full length article that you click on at the bottom of the video has a greatly edited version that excludes Nungester as does the article.)

BBC: The director of this orphanage was contacted by the American missionaries but was suspicious.

CBS News has learned the Americans contacted at least two orphanages in Port-au-Prince after the quake. The director of this one turned them away and warned what they were doing was wrong.

"They were looking for 100 orphans to take to the DR, the Dominican Republic," Hal Nungester, with the H.I.S. Home for Children told CBS News correspondent Bill Whitaker. "They had no paperwork. They had no authorization from the U.S. government, from the Haitian government, or from anyone involved. They were just taking kids. That fits right in with what I would classify as child trafficking."

We have heard stories that the team went orphanage to orphanage looking for children to collect for their mismanaged, ill-thought social experiment, but unless I missed it, this is the first time I've seen an American orphanage director and fellow missionary come forward publicly with his suspicions. I'm sure the interviews were longer than this, and I'd love to see them.

Also note in the opening of the video, Laura Silsby, when asked if she believed she owed the government of Haiti an apology, she says, she doesn't and goes on to say things are working out with God's help. This was before the was were remanded back to the slammer.

******
I am currently working on two new blogs, but am stuck with some fact checking. I hope to have one or both up soon.
Posted by Marley Greiner at 10:18 PM