Women's Health Care All About Abortion

Who knew that Haiti was so ripe for crisis tourism? Everybody (that is, the crony corporatists who run the US) want a piece of the pickins. It's a wonder any relief planes get in at all what with politicians and preachers in and "orphans" out." There are already dozens of articles and blogs on the corporate evangelical takeover of Haiti. (I'll leave the secular takeover for another day). Bible pounders are practically knocking each other off the plane playing who's on first. I hope somebody is making a compendium of these stories. I have quite a few and most likely will use some for reference in the coming weeks. At the moment, though, I'm continuing to comment on the evangelical demand for International Planned Parenthood Foundation (IPPF) that I wrote about directly below this entry, to bury itself under the collapsed PROFAMIL clinic in downtown Port au Prince. (below right)

In case you didn't read what I posted earlier, (admittedly a bit facetious, but I was annoyed), just go below, and then come back here. Despite what ALL, CWA, and their home girls claim in their I'm-the-hammer-IPPF is-the-nail poundings, the IPP Haiti page and says nothing about birth control or abortion. Here (and here) is what it says about its rescue work (emphasis theirs):

PROFAMIL's two largest clinics (that two weeks ago each served 200 Haitians a day) in Port-au-Prince and Jacmel have been destroyed in the earthquake.

We are working to help PROFAMIL resume services through a temporary static clinic and Mobile Health Units to deliver services in various tent cities where displaced persons have gathered, to provide basic first aid, as well as obstetric care and family planning. We need your help!

Because the damaged clinics are inaccessible, we are collecting money to mobilize staff and purchase supplies, including first aid and medicines. The PROFAMIL Haitian medical staff will be working in teams within the community. These are not foreign aid workers but Haitian nurses and doctors. The demand for more medical supplies is enormous. The news of the tragedy is not hyped for television; the local health situation is dire.

Ah, THAT'S the problem! IPPF Haiti is for and about Haitians, not the white man's burden and other post colonial homages.

For the record, PROFAMIL is a fully staffed organization that is operated by Haitian nurses, doctors and volunteers. 100% of the donations being solicited by International Planned Parenthood Western Hemisphere Region will be going directly to PROFAMIL's operations - to help restore basic medical services at their clinics as well as to allow their mobile health clinics to bring needed services to people who are totally isolated.

On their Facebook Pages, Planned Parenthood is also advocating that people donate to Americans for UNFPA. (United Nations Population Fund). According to Thoraya Ahmed Obaid, UNFPA's Executive Director, "We are sending reproductive health supplies to meet the special needs of women, to prevent women from dying in pregnancy and to ensure safe deliveries."

In fact, UNFPA is prioritizing assistance to pregnant women in the impacted areas who are especially vulnerable during this crisis. Haiti has the highest rate of maternal death in the region (670 deaths per 100,000 live births); now, with limited or no access to health facilities, pregnant women are at an even greater risk for complications and death related to pregnancy and childbirth. The donations (Planned Parenthood is promoting) will help UNFPA provide emergency reproductive health kits. These kits could essentially function as OB wards as they contain essential drugs, equipment and supplies to provide life-saving services to pregnant women. During periods following a major natural disaster, women often lose access to basic health services, so UNFPA is also trying to ensure that women and girls have access to basic hygiene supplies, so that they can live with dignity (even amidst the worst circumstances).

So, today, in response to IPPF's hellish mission of actually saving the lives of women and their babies, unlike the privileged neo-christers in ALL and CWA, Life Decisions International issued a wanky press release that includes the following:

"I hate to sound cynical, but I am--and my cynicism is based on experience," Scott said. "What better fund-raising tool is there than a photograph of desperate men, women and children who had been devastated by an earthquake? Planned Parenthood routinely uses natural disasters to raise money, but it addresses not one true need. When people are standing outside with a hand stretched out, they do not expect someone to put a condom or birth control pill in it. Planned Parenthood officials should be ashamed." 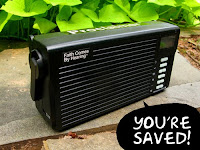 Unlike, of course, their brethren at Faith Comes by Hearing who along with food, water and supplies is sending (so far) 600 "Proclaimers," that is solar powered bibles that speak in Creole, to preach to the hurt, homeless, and orphaned standing in the food line. Of course, this isn't opportunistic like IPPF. It's ...well...biblical, just like that guy on the bus with those warped Chick tracts.

The Faith Comes By Hearing organisation says its Bible, called the Proclaimer, delivers "digital quality" and is designed for "poor and illiterate people"..."The Proclaimer is self-powered and can play the Bible in the jungle, desert or ... even on the moon!"

"We already have 600 Proclaimers on their way through our ministry partner, Convoy of Hope," said Jon Wilke, Faith Comes By Hearing's spokesperson. "These portable, solar-powered Audio Bibles will be given to local pastors so people can hear God's Word in their own language—Haitian Creole."

Convoy of Hope has people positioned on the ground to receive containers of food, clothing and supplies that are being sent to Haiti. They are partnering with churches in Haiti that are ministering to those left in the aftermath of this deadly earthquake. Pastors will receive the Proclaimer units and will use them to minister to groups of hurting and wounded people who need the Word of God in their heart language.

"There is an immediate need for another 3,000 Proclaimers. We want to equip short-term groups, disaster relief teams, church teams and other ministries with the Word of God in a format the people can use," he said.

Evangelicals have attempted to "Christianize" Haiti for years since Roman Catholicism isn't Christian, at least according to them. They aren't about to miss their big chance to kick the big dog when he's down. And let's not even get started on Voudon. It will be interesting to see what happens when the solar bible folks run into the Scientology "volunteer ministers" that John Travolta is shipping in. No word if they are bringing their E Meters with them. It's easy, though, to picture a duke out between E Meter waving Scientoloigists and the more cerebral solar Bibleists. One thing about America. No matter what the tragedy, it's always about us.

Posted by Marley Greiner at 8:49 PM