There is no rest for the wicked. Like yesterday, I didn't plan to post today on Haiti, but some things just lend itself to plugging away on the keyboard. More disaster evangelism, disaster adoption, and Very Important People appeared in today's Columbus Dispatch with the arrival of Nephtalle Jean-Pierre, soon to be renamed Gracie Hansley. Nephtalle is a former resident of Maison des Enfants de Dieu aka For His Glory Adoption Outreach in Port au Prince.

First, as if we don't already know it, we learn that God, with his super quake powers, is the great distributor of adoptees. From the way people talk lately you'd think that without God's hand in natural disasters there would be no adoption.

"God really did bring her sooner," Hansley said after she stepped off a plane from Florida yesterday and strode into the terminal at Port Columbus holding Gracie in her arms.

But what God can't do with an earthquake, our local pols can:

Gracie and other Haitian children arrived in Florida on Saturday, where Hansley and her father were waiting. Red tape, confusion and delays ensued, and at first it was not clear that Hansley could bring the little girl home. Frustrated, she and her father got on the phone. She credited U.S. Rep Pat Tiberi, a Genoa Township Republican, for helping her cut through the bureaucracy. 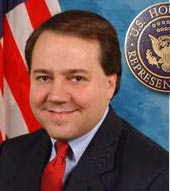 Last I ran into the toadish Tiberi (pronounced Teaberry) he was chatting up Ohio Right to Life on how unfair it is that RTL is so broke has to depend on volunteer canvassers to get out the vote, while the Dems have Hollywood doing their dirty work for them. Here is his press release offering his Very Important Person services to "frantic adoptive parents."

This must be the red tape, confusion and delays Tiberi made go away for Ms. Hansley. From the Maison des Enfants website:

Seventy-nine of the 106 children from Maison des Enfants de Dieu (Children of the House of God) orphanage, who were granted humanitarian parole, arrived in Florida on Saturday, January 23rd. The Haitian Government has blocked the remaining 27 children, including the adopted son of the For His Glory (FHG) Adoption Outreach President, Kim Harmon, from departing Port-au-Prince. In a surprise announcement, Haitian Prime Minister Bellerive stated that all future cases of humanitarian parole would have to complete an exit process with his office. He has not yet defined this exit process so no action can be taken to bring the remaining children to their adoptive parents in the United States.

Obviously, Kim doesn't know the right kind of Very Important People. Imagine, an orphanage director tuned away at the gate!

Also in today's Dispatch is pap couple, Shanna and John Gordon, from Gahanna. They have been trying to adopt Jolanda, whom they met in a Haitian hospital last September while on a mission trip with New Life Church (planted by a team from Jerry Falwell's Liberty University, in 1985.) Although they were barely into the pipeline, they'd planned to move to Haiti "to stay with Jolanda" during the adoption process. Move to Haiti? Shanna complains in her best tntitlement American style:

"The Haitian government just keeps changing the rules," she said. "We hear good news and then we hear bad news.

The article also includes a curious interview with Ohio State University-Mansfield professor Terri Bucci who heads the Haiti Empowerment Project that sends OSU faculty to Haiti to assist in teacher and classroom development. Her program is working to get 20 orphaned girls into the US who according to Bucci "have been granted humanitarian parole status to live in Ohio for two years while Haiti rebuilds. I find it difficult to believe that once here the girls will be sent back, though judging from the article they are not adoptable at the moment. Call Pat Tiberi!

The comments on the article are not what I expected. Not many tears over God's awesome plan for adoption. There's a few snarks about immigrants. And who knew the always-elected Tiberi is so disliked? But other posters responded like this:

Why is this mom changing the girl's name? Gracie? At least name her Natalie (closer to her real first name) & keep the Jean-Pierre so that she can remain connected to her roots! These poor babies.

Nice to see some civilians get it.