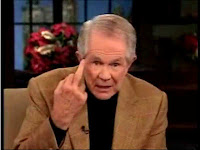 By now you've probably all heard Pat Robertson's hideous remarks about the earthquake in Haiti. A deal with the devil? And, he can't even get history right. Napoleon III! I think not! Perhaps the devil was whispering disinformation in his ear to make him look stupid. No wait! He doesn't need the devil to do that. CBN published a clarification "statement" later, that if anything, makes Robertson looks more stupid now then he did before.

Here is a video of Pat broadcasting his dementia to the world. It includes commentary from the Young Turks.

I've been an avid viewer of 700 Club for 30 years, and have watched Pat edge from pure malevolent crazydom to Altzhmierism before my very eyes. To make Robertson's looniness relevant to adoption this afternoon, here's a dialogue between Pat and Jay Sekulow, director of Robertson's theocentric legal arm, the The American Center for Law and Justice. The ACLJ represented Promise Doe, Jane Doe, Kimberly C, Russ C, and NCFA agency member Small World Adoptions in Doe v Sundquist, the unsuccessful attempt to overturn a Tennessee law that opened records for some adoptees in the state. The ACLJ was backed by amici briefs issued from NCFA, the Tennessee Eagle Forum, the Family Research Council, the American Life League, Hear My Voice (website disappeared), and a gaggle of other die hard adoptee-hating misfits. References to involvement in Sundquist have been scrubbed from their websites, but I have hard copies of all documents as well as other documents referenced here.

The following is taken from a paper I presented at Bastard Nation and AAC conferences between 1997 and 2002. (I've re-written my own comments to fix some awkward phrasing):

On the July 2, 1996 edition of The 700 Club, Jay Sekulow, playing to Robertson's bumpkin straight man, contended that the abortion rate would rise in relation to the rate of adoption records made available to adoptees. He even espoused a modified version of the American Life League's abortion conspiracy theory--that, is pro-abortion organizations were going stealth or setting up front groups to push their agendas. Thus, adoptee rights activists and organizations were simply ungrateful bastards with no legitimate beefs and were either knowing agents of abortion or dupes.

The following conversation is taken from the official transcript of that show published at the time on the 700 Club's home page, since erased. Sekulow certainly knew the difference between open records and open adoption, but I have no idea if he made a slip of the tongue, intended to smear openness in adoption in general--or if, in fact if he was implying weirdly that open adoption causes abortion. There is no doubt, though that he was referring to records access. 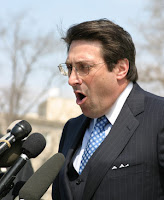 SEKULOW: ...The significance is that we expect that those who are in favor of abortion, those in the legislature that are pro-abortion, those that are trying to get this whole abortion agenda through, were looking at the Tennessee case and say "Gee, we should do this everywhere because they picked a great name, open adoption, but...

SEKULOW: Pat, they have had to. Can I give you tangible evidence? No, but I can give you the legal evidence. We looked at cases in the Untied States where judges from a Court of Appeals all over the country said, "this type of legislation opening up these records like this is pro-abortion." Those were the words a court said. There's a North Carolina Court of Appeals, Louisiana Court of Appeals, Texas Court of Appeals. These same types of bills were being put forward and the courts said, "The legislation is not pro-life. They said the opposite. They said, "This is pro-abortion This will encourage abortions and discourage adoptions." So they had to know that.

Yet nine months later on April 2, 1997 edition of MSNBC's The Site (no longer online), ACLJ's Chief lawyer Larry Crane conceded that the ACLJ did not intend to use evidence they had gathered from a New South Wales study which showed that although abortion rates went up the first year open records were in effect, they declined steady after.

Were not relying on statistical evidence for our case,and we are not required to do to.

Posted by Marley Greiner at 7:56 PM