Reuters and other news sources are reporting that a band of 10 US evangelicals with Idaho-based New Life Children's Refuge were arrested at the Malpasse border crossing (above picture in better days) trying to take 33 undocumented Haitian children into the Dominican Republic. The five women arrested were from the Central Valley Baptist Church in Meridian, and the five men from the East Side Baptist Church in Twin Falls (new reports indicate a couple men were actually from out-of-state). The 10 are currently housed in what I assume is the extremely unpleasant Haiti Judicial Police headquarters.

I have pulled quite a bit of information on New Life and the child smugglers, and intend to write about this incident at length tomorrow. I don't want to put out wrong information so, I need to clarify some of the documents I've collected. In the meantime, I've thrown a little bit together to get the word out. Here are the relevant parts of the story as published so far (my emphasis):

Authorities said the Americans had no documents to prove they had cleared the adoption of the 33 children -- aged 2 months to 12 years -- through any embassy and no papers showing they were made orphans by the quake in the impoverished Caribbean country.

"This is totally illegal," said Yves Cristallin, Haiti's social affairs minister. "No children can leave Haiti without proper authorization and these people did not have that authorization."...

...But Laura Sillsby [sic] from the Idaho group told Reuters from a jail cell at Haiti's Judicial Police headquarters, "We had permission from the Dominican Republic government to bring the children to an orphanage that we have there."

"We have a Baptist minister here (in Port-au-Prince) whose orphanage totally collapsed and he asked us to take the children to the orphanage in the Dominican Republic," Sillsby [sic] added.

"I was going to come back here to do the paperwork," Sillsby said. "They accuse us of children trafficking. This is something I would never do. We were not trying to do something wrong."

NOTE: I wonder if Silsby (her name is incorrectly spelled in the news report) tells the judge when she's popped for driving without a license, "I was going to get it next week." And what about the part where she says she had permission from the orphan master in Port-au-Prince to traffick the kids across the border. Bastardette hereby gives her Dear Readers permission to stick up a convenience store and to use her permission as your defense.

But back to the news.

Silsby said they had documents from the Dominican government, but did not seek any paperwork from the Haitian authorities before taking 33 children from 2 months to 12 years old to the border, where Haitian police stopped them Friday evening. She said the children were brought to her by distant relatives, and that the only ones to be put up for adoption would be those without close family to care for them...

Sean Lankford, the father of one of the US detainees told the AP (my emphasis)

The plan was never to go adopt all these kids. The plan was to create this orphanage where kids could live. And kids get adopted out of orphanages. People go down and they're going to fall in love with these kids, and many of these kids will end up getting adopted.

According to CVBC's latest newsletter, which includes an itinerary of their child snatch mission, New Life is: 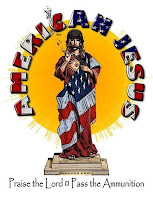 in the process of buying land and building an orphanage, school and church in Magante on the northern coast of the Dominican Republic...He (God) has provided an interim solution in nearby Cabarete, where we will be leasing a 45 room hotel and converting it into an orphanage until the building of the NLCR is complete.

And a prayer request:

NLCR is praying and seeking people who have a heart for God and a desire to share God's love with these precious children, helping them to heal and find new life in Christ.

As we suspected, God caused the earthquake and the deaths of tens of thousands of Haitians so old and new-made "orphans" could not only be reborn as cornfed adopted Americans, but reborn in Christ through the good services of New Life Children's Refuge and others of their ilk and trade. Isn't that the same thing?

There are growing reports of children missing from orphanages and hospitals, but this is the first solid report we have of do-it-yourself baby lifters caught attempting to remove children from Haiti illegally--for the good cause of adoption and redemption, of course.

I suspect due to the chaotic circumstances in Haiti, the US Embassy, which has its hands full already, will lift the traffickers visas and kick them back to Idaho, but I'd really really really really like the Haitian authorities to prosecute them for child stealing.

I'm sure that by tomorrow morning we'll hear the bellowing of the missionaries slithering their way through Haiti: "Christians are being persecuted--for the children"

This is a significant story. These people just weren't spur-of-the-moment stupids They planned and publicized their raid. I hope the incurious press doesn't let it die.

Here is a picture of 8 of the 10 New Life child stealers with text from the AP: 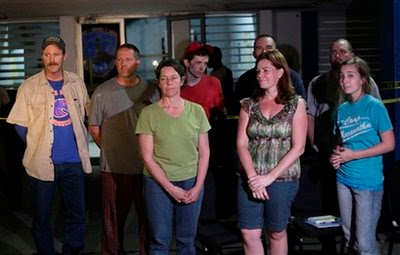 American citizens pose for a photo at police headquarters in the international airport of Port-au-Prince, Saturday, Jan. 30, 2010. Ten Americans were detained by Haitian police on Saturday as they tried to bus 33 children across the border into the Dominican Republic, allegedly without proper documents. In the front row from left to right are Carla Thompson, 53, of Meridien, Idaho, Laura Silsby, 40, of Boise, Idaho, Nicole Lark Ford, 18, of Middleton, Idaho, and in the back row from left to right are Steve McMullen, 56, of Twin Falls, Idaho, Jim Allen, 47, of Amarillo, Texas, Silas Thompson, 19, of Twin Falls, Idaho, Paul Thompson, 43, hometown unknown, and Drew Culborth, 34, of Topeka, Kansas. The names of the two Americans not pictured are unknown

The New Life 10 are scheduled to appear in court on Monday.

Thanks to Luanne Pruesner-Van de Velde and anon guy